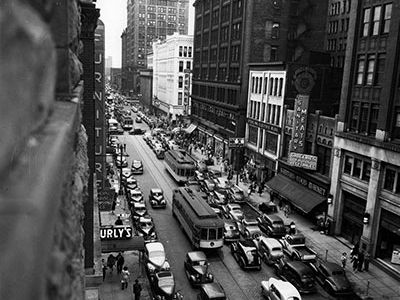 World War II was being waged in Europe and in the Pacific. The world saw the Allie invasion at Normandy, the eruption of Mount Vesuvius in Italy, and the beginning of Frank Sinatra's film career. While all of this was taking place...FABRIC SUPPLY COMPANY was quietly opening it's doors on Hennepin Avenue as a retail supplier to the local decorator trade.

The world watched as 6 prisoners unsuccessfully try to escape from Alcatraz prison island, the United Nations held their first meeting on Long Island, and Dean Martin and Jerry Lewis stage their first show as a comedy team. The San Francisco 49ers were formed this year and about this same time, FABRIC SUPPLY COMPANY became a distributor for the Maslan Duran vinyl company and started to distribute jute burlap to the local upholstery trade.

The war was over but Harry Truman issues a peacetime military draft in the U.S. This is the year that the Cleveland Indians won the World Series, Babe Ruth passed away, and the Hells Angels were founded in California. It was also the year that FABRIC SUPPLY COMPANY began to sell upholstery supplies and latex 'PINCORE' foam.

The half-century mark saw the beginning of the Korean War and the beginning of Charles Schulz 'Peanuts' comic strip. Mother Teresa began her charity work in Calcutta and Albert Einstein warns the world that nuclear war could lead to mutual destruction. Meanwhile, in Minneapolis, FABRIC SUPPLY COMPAY begins to sell synthetic urethane foam, hand in hand with 'PINCORE' latex.

Car enthusiasts were thrilled to see the first Corvette roll off the assembly line in Flint Michigan. The United States tests the H-Bomb in Nevada, Joseph Stalin dies and Jonas Salk announces his polio vaccine. The Korean War ends in July and FABRIC SUPPLY COMPANY moves from Hennepin Avenue into a much larger facility on Nicollet Island.

A new era begins with the opening of Disneyland in Anaheim, California and the debut of Gunsmoke on television. Albert Einstein dies, actor James Dean is killed in a car crash at the age of 24 and Rosa Parks is arrested for refusing to give up her seat on a bus in Montgomery, Alabama. FABRIC SUPPLY COMPANY begins fabricating synthetic foams for the upholstery industry, catering to the furniture, marine and automotive aftermarkets.

Television is a relatively new medium and it becomes very popular this year. The Huntley-Brinkley Report and To Tell the Truth both debut, The Wizard of Oz is shown on T.V. for the first time, and Elvis Presley appears on The Ed Sullivan Show. IBM introduces the first hard drive, General Electric introduces The Snooz Alarm and American actress Grace Kelly marries Prince Rainer of Monaco. As President Dwight D. Eisenhower authorizes the phrase "under God" to be added to the Pledge of Allegiance, FABRIC SUPPLY COMPANY becomes a full line distributor of 'supported' vinyls for the Maslan Duran Company.

This new decade brought us the Civil Rights Act of 1960 and a newly elected president, John F. Kennedy. The Russians launched Sputnik 4 into Earths orbit and FABRIC SUPPLY COMPANY becomes a division of Airtex Industries.

This is the year that America held it's collective breath through the Cuban Missile Crisis, the Second Vatican Council began in Rome, and the first Wal-Mart store opened it's doors. The Rolling Stones made their debut, prayer in public schools was ruled unconstitutional, and Marilyn Monroe was found dead in Los Angeles. Back in Minneapolis, FABRIC SUPPLY COMPANY continued to grow by expanding it's sales territory to eleven states.

All the good that happened in America this year was overshadowed by the assassination of president John F. Kennedy on November 22nd. Previously in '63, the Pro Football Hall of Fame opened, as did the first James Bond movie. Martin Luther King Jr. delivers his "I have a Dream" speech and FABRIC SUPPLY COMPANY moves to it's new, much larger facility on 35th and 2nd Street in North Minneapolis.

Here we go... The Beatles appear on the Ed Sullivan show, Jeopardy debuts on NBC, and Mary Poppins has its world premiere. The very first Ford Mustang rolls off of the assembly line and FABRIC SUPPLY COMPANY decides to expand its product line to include automotive fabrics, leatherettes, headliners and carpets.

Again, all the important events this year are overshadowed by the assassinations of Dr. Martin Luther King Jr. and presidential candidate Robert F Kennedy. Americans did see the Civil Rights Act of 1968 signed into law and the Games of the XIX Olympiad held in Mexico City. NASA launches Apollo 7, Rowan and Martins Laugh-In debuts on NBC and Johnny Cash records "Live at Folsom Prison". FABRIC SUPPLY COMPANY decides to expand its product line to include marine vinyls, carpets, toppings and tarp materials.

Apollo 14 lands on the moon...to the excitement and skepticism of Americans everywhere. The world's four billionth baby is born, Walt Disney World opens in Florida and a man calling himself D.B. Cooper hijacks a plane and parachutes into a thunderstorm with $200,000 in ransom money. FABRIC SUPPLY COMPANY moves into a much larger facility only one block away on 34th and 2nd Street.

Former U.S. Vice President and renowned Minnesotan, Hubert H. Humphrey dies and is honored in Saint Paul. Volkswagen becomes the first non-American automobile manufacturer to open a plant in the U.S.The New York Yankees win their 22nd World Series and the first Susan B. Anthony dollar enters circulation. The same year that all this happens, FABRIC SUPPLY COMPANY doubles the number of foam types that it has available to fabricate and enters the 'High Resilient' foam market.

Americans watch the first untethered space walk in February, and watch Actor/Governor/Presidential Candidate Ronald Reagan win the White House with 59% of the popular vote in November. This is the year that Kirby Puckett began his eleven years with the Minnesota Twins and the year that FABRIC SUPPLY COMPANY sent representatives to Columbia, South America to create an alliance with a major expanded vinyl mill that still exists today.

The Seinfeld show premiers and actress Zsa Zsa Gabor is arrested in Beverly Hills for slapping a policeman. The world is stunned as the Berlin wall falls and the Exxon Valdez spills 11 million gallons of oil into the sea in Alaska's Prince William Sound. Far from Alaska, back in Minnesota, FABRIC SUPPLY COMPANY begins to import vinyls directly from overseas.

George H. Bush is televised falling violently ill at a state dinner in Japan, Johnny Carson retires from the Tonight Show, reputed mafia boss John Gotti is sentenced to life in prison and Bill Clinton is elected president. Disneyland Paris officially opens under the name "Euro Disney" and FABRIC SUPPLY COMPANY is purchased from the Airtex Corporation by its long established management team.

The Lion King opens in US theatres, George Forman wins the WBA and IBF World Heavyweight Championships and the first passengers travel through the Channel Tunnel. FABRIC SUPPLY, Inc. expands again into an additional 6000 square feet.

Bill Clinton begins his second term and the world is introduced to the first Harry Potter book. The world also mourns the loss of Mother Theresa of Calcutta and Diana, Princess of Wales. FABRIC SUPPLY, Inc. again expands into another 6000 square feet to accommodate its inventory increases.

There have been many world and local events that have caught our attention since the beginning of the new century. We have watched the world disasters, both natural and man-made, but we have also seen the wonderful good that this third millennium has brought. Fabric Supply survived the Y2K scare and has continued to grow and expand. Fabric Supply, Inc., becomes Fabric Supply Incorporated in 2017 as it is sold to Randy and Jen Oelschlager. We have been in business for over 70 years (over 50 of those years in the same location) and stand ready with an accumulated 100 years of experience in the business of upholstery and foam to help our customers in any way we can.

Stay up to date on the latest deals and news from Fabric Supply.